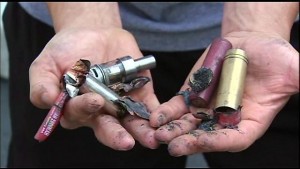 A 14-year-old has been blinded in one eye and potentially faces permanent damage to his hands after allegedly testing an e-cigarette at a mall kiosk in Brooklyn, New York. The latest in a string of similar incidents, the teenager’s injury may raise questions over the safety of the devices as well as how much they are marketed to youth.

Adolescents who try e-cigarettes may be more than twice as likely to move on to smoking conventional cigarettes as those who have never tried the devices, previous research has found. About 2 million middle and high-school students tried e-cigarettes in 2014, triple the number of teen users in 2013, the Centers for Disease Control and Prevention reported last year.

“In addition to the health hazards of vaping nicotine, other forms of nicotine ingestion like swallowing can be deadly,” Leventhal said. “The high concentration of nicotine in some e-liquids if swallowed or absorbed into the body through other means is toxic, especially for infants and toddlers, who may be the siblings of older children who might be purchasing e-liquids and not aware of such hazards.”

Leor Domatov said he was trying out an e-cigarette at the Plaza Vapes kiosk in Brooklyn’s Kings Plaza Mall when it exploded in his hands and face. Domatov, who is only 14, wouldn’t have legally been able to buy one of the products because state and local law forbids the sale of e-cigarettes to minors. Domatov’s father hired Marc Freund, a partner at Lipsig, Shapey, Manus and Moverman, to reportedly sue the kiosk owner and mall.

Employees at the kiosk reportedly distribute promotional cards advertising the company’s Instagram account and packaging that resemble popular breakfast cereals. The employee who allowed Domatov to test the e-cigarette had only been on her second day at the job.