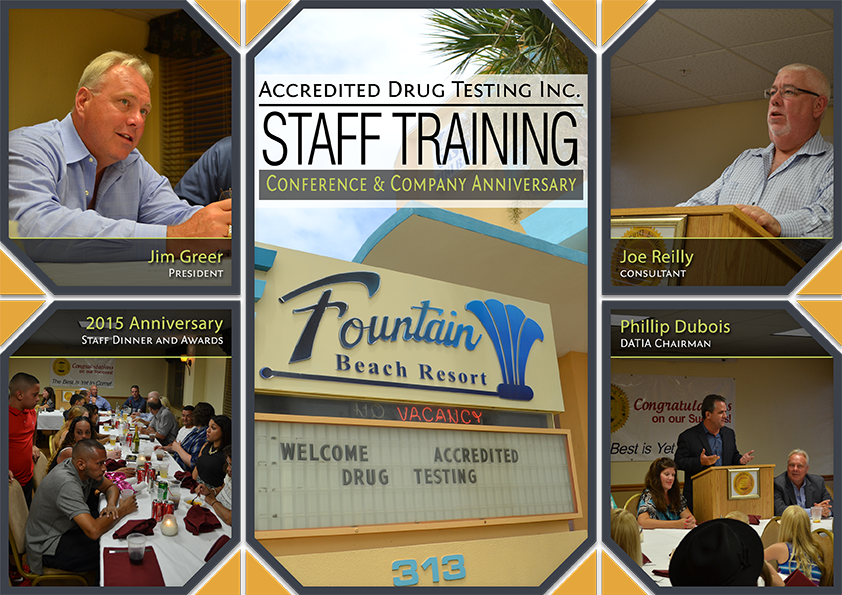 Speakers included, Mr. Joseph F Reilly, former Chairman of the Drug and Alcohol Testing Industry Association who spoke on the specifics of laboratory testing of various illegal drugs. Mr. Robert Merril of Alere Laboratories and EScreen also made a presentation regarding the current state of drug testing throughout business community.

A comprehensive evaluation of affiliated drug testing collection sites was also reviewed and to ensure that all collection sites Nationwide are complying with DOT and NON-DOT regulations and meeting the high customer service standards required by Accredited Drug Testing Inc.

Accredited Drug Testing also celebrated its anniversary by holding a dinner and awards presentations on the last night of the conference in which Lisa Greer served as the master of ceremonies. Speakers at the dinner included Mr. Joseph F Reilly and Mr. Phillip Dubois, Chairman of the Drug and Alcohol Testing Industry Association (DATIA). Chairman Dubois noted in his remarks that Accredited Drug Testing Inc was one of the largest growing drug testing companies in the U.S and had become recognized as a leader in the drug and alcohol testing industry. The evening also included the presentation of performance awards to Stephanie Calderon, Operations Manager and Melissa Guzman, Customer Service Supervisor in addition to an award presented to company President/CEO James A Greer for his leadership and national expansion success.