March 7, 2016
According to Georgia authorities, drug smugglers are getting more creative to move illegal drugs from point A to point B The smugglers are 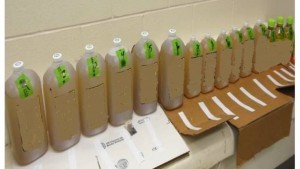 hiding large quantities of illegal drugs, such as methamphetamine, in the suspension of tour busses, and disguising it as beer.

The Georgia State Patrol nabbed the two buses packed with illegal drugs and cash to be smuggled back into Mexico. In one of the busses the drugs were packed into suspension bars behind the wheel drums. The other bus had a secret compartment under the center aisle. Officials say over one million dollars worth of methamphetamine and other drugs were found in the bus.  Atlanta authorities have been busy shutting down numerous pipelines that were bringing illegal drugs into this country.

Methamphetamine, also known as meth, crystal meth, crystal, and ice, is an incredibly addictive stimulant closely related to amphetamine. Meth alters the dopamine levels in the mind that gives users a euphoric rush feeling that builds dependency, and easily becomes addictive. Chronic use can lead to substantial brain damage. Meth can be detected in a 5-panel drug screening.

Most the methamphetamines distributed in the United States are manufactured in labs in Mexico. These “superlabs” are usually linked to the Mexican drug cartels, that are responsible for heinous crimes across North America. Most ingredients made to use meth are inexpensive and can be bought over the counter, making its accessibility incredibly easy.  The levels of toxicity from the production of methamphetamines can remain in the environment for a long time, causing health issues for those around the area.

Pharmacies and other retail stores are taking action to prevent abuse of the ingredients used to make methamphetamine, by limiting supplies of products known to make meth. Lawmakers are also taking action against distributors with increased prison sentencing ranging from 10 to 30, or even more years of incarceration.