Having Problems Quitting Smoking? Heavy Drinking May Be The Reason. 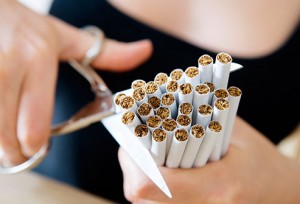 A small study of Polish men revealed that people that are alcohol dependent process nicotine in their bodies quickly, making it harder for them to quit.

In 2011 and 2012, the researchers studied 22 white male smokers at an inpatient alcohol addiction treatment center in Poland. They analyzed participants’ urine samples to gauge nicotine levels and metabolism at one, four and seven weeks after detoxing from alcohol.

“We didn’t measure what was happening when people were drinking, but after they stopped, their elevated rate of nicotine metabolism slowly subsided,” said lead author Noah R. Gubner of the Center for tobacco Control Research and Education at the University of California, San Francisco.

“When nicotine metabolism is higher, people tend to have a harder time quitting smoking,” Gubner stated. The speed of nicotine processing declined by about half over the seven-week period, even though the men did not change how many cigarettes they were smoking per day.

The results might be useful for helping recovering alcoholics quit smoking, they add. More research is needed to know if nicotine replacement therapy is more effective after people stop heavy drinking, however. The researchers write in Drug and Alcohol Dependence that heavy alcohol use may trigger the enzyme in the body primarily responsible for metabolizing nicotine. And faster nicotine processing could explain the poor rates of quitting smoking among people who are alcohol dependent.
Quitting alcohol and quitting smoking are complicated undertakings, and nicotine and alcohol could have some synergistic effects on reward and pleasure, Gubner said. Also, heavy drinking can affect decision-making, including the decision to smoke less or not at all.
With drug and alcohol testing centers throughout the entire state of United States, Accredited Drug Testing Inc. is available to answer all of your drug and alcohol testing questions and needs. For more information contact: