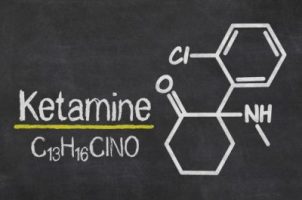 Ketamine was developed in the 1960s to replace phencyclidine (PCP) as an anesthetic agent.  Most of the time, it is used in veterinary medicine as an animal tranquilizer, although also may be used in human medicine as an anesthetic. Used improperly, on the streets, the drug is often injected, consumed in drinks, snorted, or added to joints or cigarettes. Ketamine was placed on the list of controlled substances in the US in 1999.

One of the most alarming facts about Ketamine is the primary age group of abusers is between the ages of 12 and 25 years old. According to the Drug Abuse Warning Network, individuals aged 12 to 25 accounted for 74 percent of the Ketamine emergency department mentions in the United States in 2000. Use among high school students is a growing concern. Nearly 3 percent of high school seniors in the United States used the drug at least once in the past year.

In addition to Rohypnol and GHB, Ketamine is also considered a “club drug”, or “date rape drug” and may be used in drug-facilitated sexual assault situations.
Adults sometimes place the drug in the drink of an unsuspecting user and await the effects of the drug to take place. Once the individual is under the influence, there are risks of amnesia and blackout.

Ketamine is a very dangerous drug and even using it a single time can have serious repercussions including the potential for long-term side-effects, coma or death. According to the National Institute on Dru

g Abuse, “Ketamine distorts perceptions of sight and sound and produces feelings of detachment from the environment and self.” At low doses, users can experience impaired attention, learning ability and memory. In higher doses, it can cause dreamlike states, hallucinations, delirium, unconsciousness, and flashbacks-reoccurrences of a certain aspect of the drug experience at any time. Other associated side effects are depression, delirium, amnesia, impaired motor function, high blood pressure, and potentially fatal respiratory problems.

The most popular name used for ketamine in the streets is “Special K”. There are also many other common street names that refer to this drug.

Ketamine street names that are brand or type-specific include:

As with testing for any other drug, there are specific procedures for Ketamine drug testing. Ketamine is not included in a 5-panel drug screen. The only way Ketamine use can be detected is by studying the levels of “Norketamine” in the blood and urine. The parent drug, Norketamine is detectable in the blood and urine of users for up to 7-14 days depending on dosage and frequency of use. In some cases involving regular users, Ketamine can be detected in a drug screen beyond the typical 7-14 day period.