A New Direction on Drugs

Michael Botticelli says the old war on drugs is all wrong, and wants to refocus the U.S. drug policy 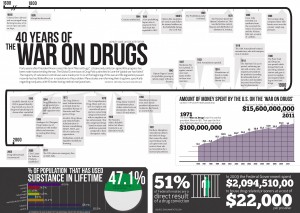 The following is a script from “A New Direction on Drugs” which aired on Dec. 13, 2015, and was rebroadcast on June 5, 2016. Scott Pelley is the correspondent. Denise Schrier Cetta, producer.

After 40 years and a trillion dollars, the nation has little to show for its war on drugs. Prisons are beyond crowded and there’s a new outbreak in the heroin epidemic. If it’s time for a change, it would be hard to find a leader more different than the man we first met last year. Michael Botticelli is the president’s new director of the National Drug Control Policy. He isn’t a cop. He’s lucky he didn’t go to jail himself. And we knew that things had changed the first time we used the nickname that comes with his job, the “drug czar.”

Michael Botticelli: It’s actually a title that I don’t like.

Michael Botticelli: Because I think it connotes this old “war on drugs” focus to the work that we do. It portrays that we are clinging to kind of failed policies and failed practices in the past.

Scott Pelley: Are you saying that the way we have waged the war on drugs for more than 40 years has been all wrong?

Michael Botticelli: It has been all wrong.

Blunt force didn’t knock out the drug epidemic. 21 million Americans are addicted to drugs or alcohol. And half of all federal inmates are in for drug crimes.

Michael Botticelli: We can’t arrest and incarcerate addiction out of people. Not only do I think it’s really inhumane, but it’s ineffective and it costs us billions upon billions of dollars to keep doing this.

Scott Pelley: So what have we learned?

Michael Botticelli: We’ve learned addiction is a brain disease. This is not a moral failing. This is not about bad people who are choosing to continue to use drugs because they lack willpower. You know, we don’t expect people with cancer just to stop having cancer.

Scott Pelley: Aren’t they doing it to themselves? Isn’t a heroin addict making that choice?

Michael Botticelli: Of course not. You know, the hallmark of addiction is that it changes your brain chemistry. It actually affects that part of your brain that’s responsible for judgment.

“WE CAN’T ARREST AND INCARCERATE ADDICTION OUT OF PEOPLE. NOT ONLY DO I THINK IT’S REALLY INHUMANE, BUT IT’S INEFFECTIVE AND IT COSTS US BILLIONS UPON BILLIONS OF DOLLARS TO KEEP DOING THIS.”

That is the essence of Michael Botticelli’s approach — addicts should be patients, not prisoners. He did it in Massachusetts as Director of Substance Abuse Services. There, his initiatives included a high school for teens in recovery and expanding drug courts, like this one in Washington D.C., where offenders can choose treatment over jail. And the charges can be dropped.

Scott Pelley: You know that there are people watching this interview and they’re saying to themselves, “Oh, great. He wants to open the jails and let the drug addicts out.”

Scott Pelley: I think we have to base our policy on scientific understanding. You know, and we’ve had really great models and evaluated models to show that we can simultaneously divert people away from our criminal justice system without an increase in crime. And it actually reduces crime.

Botticelli pursues reform with the passion of the converted because he, himself, is recovering from addiction. Back in 1988, he was a university administrator, whose car slammed into a truck. Botticelli was drunk, in truth, he’d been drunk for years.

Scott Pelley: Did you love drinking?

Michael Botticelli: I would say that I probably had an unhealthy love affair with drinking. You know, I grew up as this kind of insecure kid, you know, kind of making my way. And, you know, drinking took all of that away, you know? People drink and do drugs for a reason. ‘Cause it makes them feel good, you know — until it doesn’t anymore.

Scott Pelley: Is it true that after the accident you woke up handcuffed to a gurney?

Michael Botticelli: I did. I did. And, you know, you think to yourself, “how did I get to this point, you know, in my life?”

That point included imminent eviction from his apartment because the booze had washed away all the money.